The antagonist at the center of one of baseball Twitter’s most juvenile skirmishes speaks with the remnants of a Texas drawl. He tells dad jokes and laughs easily, as he did when he answered the telephone the night before Thanksgiving and explained that he had just been “arguing with Mrs. Sugar Penis.”

“It’s still brought up a couple times a week,” said Brian Thomas, a 53-year-old engineer and devout fan of the Texas Rangers, who is known more widely by his notorious nom de Twitter, @MrSugarPenis.

To a tiny subset of Very Online baseball fans, the risqué handle needs no further elaboration. It was nine years ago when Thomas scrolled through his timeline and came across a Tweet promoting a column he found to be nonsensical. It was penned by the prominent national baseball writer, Ken Rosenthal.

What followed was the kind of brief, snarky and hilarious exchange that has made users nostalgic for Twitter’s good ol’ days — or, perhaps more accurately, the slightly less cesspooley ol’ days — before the service’s future became a source of consternation following its purchase by billionaire Elon Musk. Rosenthal, at the time writing for Fox Sports, thought that he landed a knockout blow when he replied dismissively, in all caps, without the dignity of proper punctuation: “READ THE COLUMN”.

Only later did Rosenthal realize that it was a bit of a self-own. By sending his snippy reply, he had unleashed the inner seventh-grader in thousands of his followers by inadvertently signal-boosting a man who named himself after a saccharine phallus.

“It still comes up once in a while and I just laugh, there’s no hiding,” said Rosenthal, who joined The Athletic in 2017. “It’s part of a legacy, whatever small legacy that might be. It’s unfortunately a part of it.” 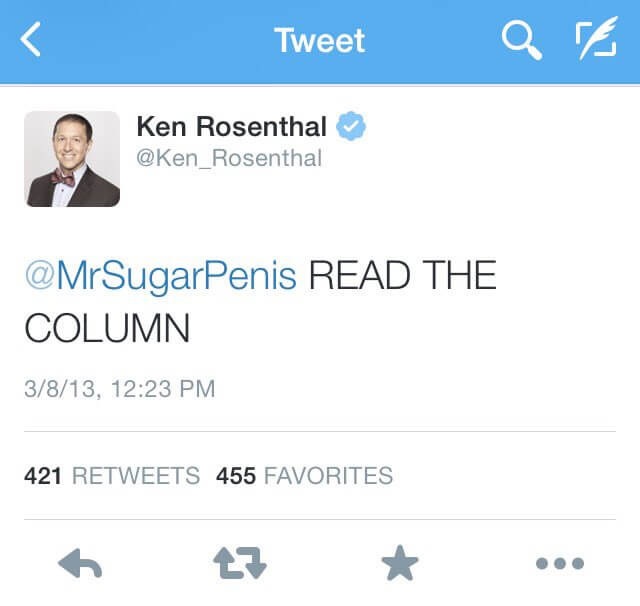 Rosenthal has no memory of what even triggered the exchange. At issue, it turns out, was a column about longtime Rangers star Michael Young. Rosenthal wrote that the aging veteran might experience somewhat of a defensive renaissance with his new team, the Phillies. “Sabermetricians, take a deep breath: One of your favorite whipping boys actually thinks he can improve his defensive range at age 36,” Rosenthal wrote in his lead. Thomas disagreed.

And because it was Twitter — where Thomas maintains “mockery is the best way to debate a point” — he figured that the only appropriate response was snark.

Thomas grew up in Ft. Worth, Texas, though he hasn’t lived in the area for more than a quarter century. He makes Northern Virginia his home these days, where he lives with the aforementioned Mrs. Sugar Penis. “And there’s a Little Sugar Penis,” he adds. But like many fans, it is through sports that he maintains allegiance and connection to the place he was raised.

“That’s the only thing that doesn’t change right?” he said. “At least if you’re a sports fan.”

He still keeps track of the Cowboys, Mavericks and Rangers, of which his fandom…